i can resist everything except temptation ... which is why i turned to glance at the last page ( 631 ) when I was still only up to page 563 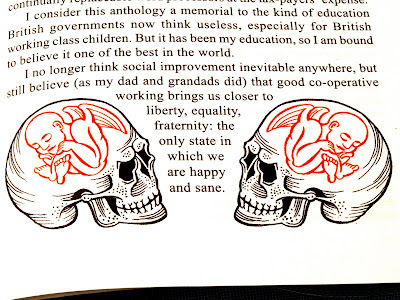 from alasdair gray's wonderful "book of prefaces" ... what a wonderful design for my next tattoo
Posted by tristan at 8:49 pm No comments:

Deep down inside, I was mostly a grumpy kid & now I am becoming a grumpy old man again … and I am ashamed to say that this morning my bad temper showed itself, luridly, in all its ignominious & toxic putrescence.

We have been making a lot of changes to our working routines in the eternal pursuit of efficiency, which as you know usually implies harder work for wage slaves. For me, it seems to involve longer hours & more uncertainties. Despite getting up even earlier to be at work even earlier, it is taking longer to get out on the road & I’ve been reaching my first customer later than they or I would like me to. We are assured that these discomforts are merely “teething problems” but, driving anxiously along the wide empty road in to the outskirts of Crawley this morning, I was flashed by a speed camera, just before discovering that I’d missed my place in the queue for the first customer’s loading bay.

Later, whilst I was frantically trying to reorganize my schedule as “efficiently” as possible, my supervisor, Vic, who is a very gentle & relaxed man most of the time, ( at very least 99.99% ), phoned me to make a reasonable criticism because I’d forgotten to fill in a standard form which is part of statutory daily routine, and he then made a reasonable request for corrective action. The daft thing was that having set out on my round, I’d then gone back to the desk to fill in the form, and had then been distracted by half-a-dozen words of conversation ( friendly banter ), & then in response to Vic’s call I had rashly averred, using rarther violent language, that I’d already done the job.

Only in the instant after I’d put the phone down, did I realize that I hadn’t done it. Uh, oh ! So what I had just said to Vic was absolutely & transparently, luminously & totally, untrue. I’ve apologised, but neither fully nor adequately, and have been cowering all day beneath the well known twin clouds of shame and self-loathing.

Arriving home & feeling quite drained of energy, I settled down to skim last week’s New Scientist, in search of diversion & stimulus; and the title of an article by Dan Jones leapt off the page to smack me in the eye … and to put my petty troubles in a wider context. “How Do You Justify Yourself ?” Will you excuse me while I quote the first two paragraphs ?

“We all tend to rationalize our bad decisions and try to hide our mistakes, even from ourselves. Now it turns out that the psychological machinery to do this exists even in young children and evolved a surprisingly long way back in our primate ancestry. "

"When things go wrong for us, we have a choice ― give up on a cherished self-image (“I’m irresistible to women,” say ), or keep it and play down the situation (“I didn’t really like her anyway …”). Over the past fifty years, hundreds of studies have revealed the many tools at our disposal which cope with this “cognitive dissonance” ― from selective memory to the biased framing and re-telling of events. These allow us to live with our choices and, ultimately, ourselves, yet their origins are poorly understood."

The article goes on to describe some recent experiments which seem to show the behaviour that is symptomatic of this kind of dissonance is already established or embedded, both in primates and in small children. I find this disheartening because it makes it seem so much harder for me to escape from patterns of behaviour that are so deeply embedded in me. Damn ! Now I have to claw my way out of the primeval slime all over again !
Posted by tristan at 8:36 pm 3 comments: 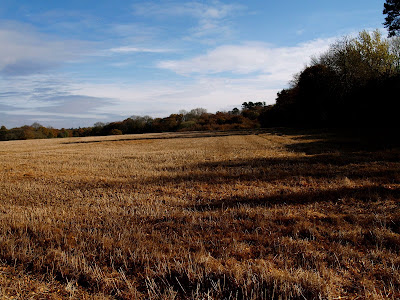