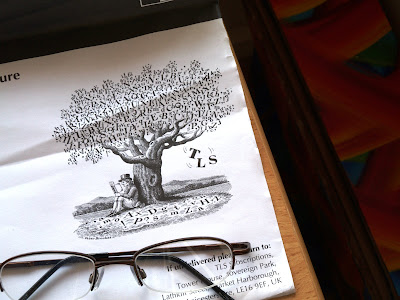 the subscription for the times literary supplement is no longer affordable
i shall miss finding this logo on the doormat
the artist is peter brookes ... a studious and affectionate pastiche of thomas bewick
Posted by tristan at 7:26 am No comments:

In the last week I’ve had a number of dreams that involved anger and confrontation.

This naturally follows a real-life verbal confrontation which took place at work and created some difficulties, but has since been resolved to everyone’s satisfaction.

In last night’s dream I was irritated by the inability of a young neighbour to control his pet, the size of a large dog, which kept chasing and annoying everyone. The surreal part of the dream was that the pet was a long-haired, pale lilac coloured, tarantula.

I now realize that my dream has a simple two-part explanation.

On most days, a young neighbour exercises three pit-bulls on the green outside our window without the slightest possibility of being able to restrain them if the need should arise; and there was a photograph in the news this week, taken from a BBC wildlife film, of an enormous and hairy bird-eating spider sitting comfortably on the palm of a man’s hand.

But where, oh where, did my spider’s long lilac coloured hair come from ?

Ah ! Maybe it was a snatch of thirty year-old sports footage I’d seen on a friend’s TV one day, showing the balletic wrestler, Adrian Street, in combat on an afternoon when his golden hair had been coloured purple to match his frilly and sequinned purple velvet dressing gown.

It has to be said that the egomaniac Adrian was a brilliant wrestler, so brave and quick that comparisons with pit-bulls and tarantulas seem entirely appropriate.

Now that the Olympics has gone professional, they might as well introduce Saturday Afternoon Wrestling as a medal sport, in line with dressage and synchronized swimming. 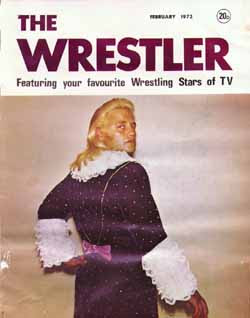