bloody 'ell, tris ... they're more like bumble bees than bluebirds ! 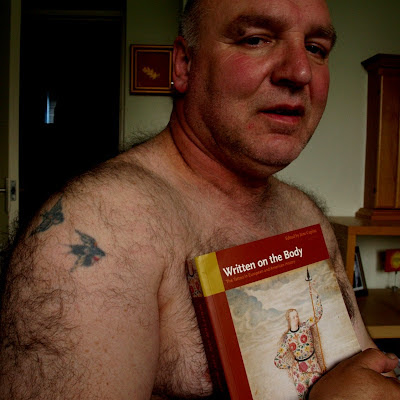 bluebirds engraved by brian eagle in the brick shed behind his council house in trowbridge ... the front one in 1982, ten years before the follower ... on the first occasion, brian's hair was jet black, on the second 'twas snowy white ... as you know, the bluebirds signify innocence in the pursuit of happiness, from whence their owner's childish expression ... and as i've reported previously, it isn't arrested development, it's a straightforward case of accelerated regression
… not long after the first tattoo was made, one hot sweaty afternoon in july 1985, I made my way to the parish of Saint Paul’s in Bristol for the wonderful (mostly) Caribbean street carnival … and having witnessed a fine procession, and visited the long street of stalls and bandstands, a terrible thirst came upon me, so I fought my way inch by inch through a jolly crowd to the bar of the Inkerman, a large square Victorian pub with a sweet-natured clientele (in those days) and a thriving night-life … and as I waited for my glass to be filled, a lady with a strong brown shoulder and a conspicuous cleavage softly pushed her perfumed self into the paper-thin gap at my side and commanded the provision of two pints of beer and two steak and kidney pies … then confidently taking a full pint mug in each hand, she crossed her arms and instructed that the hot pies be placed in the crooks of the arms, and wincing from the heat of the pies, she then eased her stately path back into the crowded street, with me not far behind ... there, with commendable elegance, she stepped in to the gutter, crossed her little pointy feet, lowered her bottom very slowly to the kerb and sat there cross-legged in the sun, without spilling a drop on her new blue jeans … she then ate both pies and drank both pints, pausing now and then to speak to a number of middle-aged working men who were all on first-name terms … and then, having finished her breakfast/lunch, she turned to me for a light, which I didn’t have but someone else did … and whilst she smoked and before she left to go about her business, I seized the opportunity to ask about the intriguing tattoo around her ankle, the rounded and sloping script of which seemed indecipherable … she said she had once spent a rainy Saturday drinking in Hastings with some “clients”, a group of sailors, who took her to a tattoo parlour … and whilst they were being tattooed, she concentrated on finishing their bottle of whiskey, and when they turned at the end and offered to pay for her, and then lifted her bodily in to the tattooist’s chair, she was too dazed to argue or resist … the tattooist politely and patiently asked what design she wished for, but all she could mumble was “I don’t fucking know !” … and that was why he wrote his name and telephone number around her ankle !
Posted by tristan at 6:18 pm 2 comments: