sir robert clayton, dame martha clayton, and their baby at bletchingley in surrey 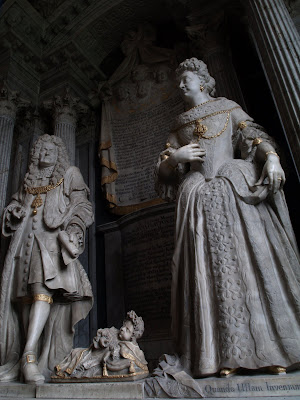 Here rests what was Mortal of Sr. ROBERT CLAYTON Kt. in the year MDCLXXX Lord Mayor and at his death Alderman and Father of the CITY of LONDON and near XXX years one of its Representatives in Parliament.By the Justest Methods & Skill in Business He acquir'd an Ample Fortune, which He appli'd to the Noblest purposes, & more than once ventur'd it all for His Country. He fix't the Seat of his Family at Marden, where he hath left a Remarkable instance of the politeness of his Genius, and how far Nature may be improved by Art. His Relations, his Friends, the Hospital of St Thomas in Southwark (of which he was the President) Christ Church Hospital & the Workhouse of London, were large shares of his bounty. He liv'd in the Communion of the Church of England & in perfect Charity with all Good men however divided amoung themselves in opinion The Welfare of his Country was the only Aim of his Publick actions and in all the various Efforts that were made in his time for preserving it's Constitution, He bore a great share & acted therein with a Constancy of Mind which no prospect of danger could ever shake.It's but Just the Memory of so Good and so Great a Man should be transmited to after age, since in all the private and Publick transactions of his life He hath left so Bright a pattern to imitate but hardly to be outdone.He was born at Bulwick in Northampton, Shire the XXIX day of September Ano: Dom: MDCXXIX and died at Marden the XVI day of July MDCCVII.Gulielmus Clayton Nepos et Haeres>D-D< href="http://emotionalblackmailers.blogspot.com/2006/09/sir-thomas-clayton-behind-saint-thomas.html">http://emotionalblackmailers.blogspot.com/2006/09/sir-thomas-clayton-behind-saint-thomas.html
Posted by tristan at 6:59 pm No comments:

... their only child died very young 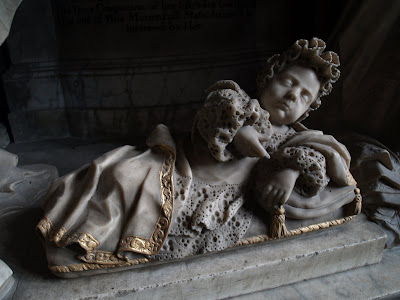 Posted by tristan at 6:55 pm No comments: